via IFTTT
Posted by Unknown at 6:33 AM No comments:

Is this your dog? Acidophilus treatment for your dog. 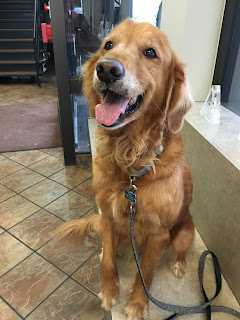 Several years ago when my Missy girl, a sweet Golden Retriever, developed these symptoms, there was a long, frustrating period ahead for us. As a professional dog-walker for The Pawfessionals Dog Walkers & Pet Sitter, Dallas, I was especially frustrated. After all, I was supposed to know the basics about caring for dogs. I had cared for my own dogs, as well as client dogs in the Dallas, Texas, area for several years. There was, to my relief, an eventual cure for this. Take a look and see if this sounds familiar:
1) Does your dog have a consistently "sweet/sick" smell, not the typical dirty dog smell, but the sweet/buttermilk-y smell that you can't attribute to just needing a bath?
2) Does your dog experience hair loss on parts of his/her body, accompanied by skin redness and possibly pustules? This could be even worse in the hot summer months. There was one summer that she lost all the hair on her entire tail -- what they refer to as the rattail. She looked and felt awful!
3) Does your dog's coat seem to have an oily feel even when freshly bathed?
This describes what Missy began experiencing before the age of two. I tried everything. It was miserable for her and a sad confusion for me. What to do? The veterinarians (and I use the plural form) would administer steroids to cool down the red skin and irritation. There were times that antibiotics were given to alleviate the infected areas. To make matters worse, Missy had adverse reactions to the steroids in the form of bloody stool. So the answers were evading me and also evading the doctors. But there was a reason and a cure. It came from someone without a medical background, but with a similar experience with her dog. I was past the point of challenging anyone who seemed to have any suggestions. I took her up on it. Thankfully!!
Missy's little system was and probably still is producing an overabundance of yeast. What offsets yeast on the pH charts is acidophilus. It's a natural, and when used proportionally, no side effects at all. I was warned to not expect anything immediate in the way of symptom relief. Be patient. Keep doing it daily. So to Whole Foods I went and got my first bottle of acidophilus. Each morning a tablet was placed in her food. Nothing looked better even a month later. But then, given another few weeks, I started noticing fewer and fewer bare spots, a more vibrant, oil-free coat. Oh, and the odor was fading as well. Now, during this time I did comfort her with hypoallergenic bathing (which I had always done anyway) but finished the baths with a vinegar rinse made up of one part vinegar to three parts water. This was sort of a Band-Aid for the moment. It cooled her off, and the vinegar, just like the acidophilus, was an offset to the yeast. Time frame for all good? I'd say it was six months to almost a year before I saw her first summer that came and went with not a single skin issue.
We're now going on our fifth or sixth year in 100% remission of this puzzlement that afflicted her for years. Here's what you have to know: DO NOT STOP THE ACIDOPHILUS just because your dog becomes symptom free. It's their system that's a bit off and it will go back to dominating their body if you decide enough is enough -- all good now! No. You must realize that this is something like insulin to a diabetic. Just because the symptoms are gone doesn't mean their bodies have re-set.
If you have a much smaller dog than mine, a 65-lb. Golden, go for the children's acidophilus, either in tablet or liquid, and do your math on how much is needed for the individual size and weight of the dog. And another thing that I'll stress: Do not go for the cheapest, whatever you can grab at the nearest drug store. I am a believer in the idea that you need a high-quality product to produce the fantastic results that Missy has enjoyed. Make it a part of their daily intake.